Young People For is an incredible opportunity for folks who are interested in learning from and building with other progressively-minded, young advocates for change.

I started my Fellowship experience in 2014, as a rising junior at Brown University. Although I had some experience learning about progressive issues in the academy, from an academic standpoint, and working with students and low-income communities of color, I came to realize that there was much that I did not know. Over the course of the Chicago regional training, I came to realize that I had never challenged myself to consider the struggles of others who didn’t share my identity.

The regional training experience, which serves as fellows’ first in-person interaction with the program and with other fellows and alumni, is a critical point in the YP4 journey. For me, it brought up two major thoughts that seemed incredibly contradictory at the time. On one hand, I was deeply inspired and motivated by the compassion, the accomplishments, and the passion of everyone who affiliates with YP4; it made me feel much more connected than I ever had in this realm, and I began to understand the common issues that many seemingly-disparate communities face, and I began to learn important terms, such as “intersectionality”. I was captivated by the implications of the Root Cause Analysis activity, challenged to share my personal narrative in a much fuller and more personal way than I ever had, and galvanized to act as a result of the approaches to social change that we discussed. On the other hand, I was shaken. I had many of my assumptions about the ways that the world operated called into question, and I came into contact with the fact that “privilege” takes on far more forms than just a race or class basis. I was called out for one of the first times, and I was exposed to words and concepts with which I had not even the faintest familiarity. The challenge which most stuck with me, however, was the question of how I could make my work matter when the issues that we fight are so multi-faceted, historically rooted, and institutionally protected. I questioned whether I even belonged in the room, when it appeared that others had accomplished and educated themselves on so much more.

This is the point that many prospective Fellows probably fear. This fellowship is a commitment, and it will change your world perspective. That is a scary thing. What I came to realize, however, is that YP4 is intended to educate, guide, and build capacity. What is true is that we all have something to contribute,

Over the course of my fellowship experience, I was educated about perspectives and issues which I had never previously engaged with, and I had the opportunity to, with the help of the wonderful YP4 team and other fellows, recognize my own privileges and to identify my areas of ignorance, which I worked to understand and progress past.

Throughout the experience, I was supported by the YP4 team, who provided me with resources for the questions that arose, and who guided me through the development of my Blueprint. After the January National Summit, I got to work implementing the Blueprint that I, with the help of my mentor, Karl Kumodzi, developed as a result of such exercises as the Community Scan and the Visioning for Social Justice conversations. I came to realize that my skill set and passion coalesced in an “Idea Creation” approach to social change.

For my Blueprint, I completed two projects. For the first, I created the SpeakUp! Oratorical Contest for public high school students in Providence, a program which encouraged youth to think critically about their development and about the ways in which their identities influence their interactions with the world around them, and which connected them with local figures and resources to help them in making successful steps forward. The oratorical contest provided opportunity for students to create and effectively deliver a speech on their experiences with and reflection on their identity, which was intended to build confidence in public speaking, and to provide the occasion for youth to reflect on their goals, ambitions, and identity. 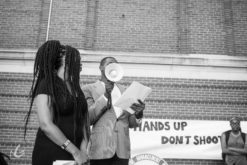 For the second project, I coordinated a social media campaign and gallery exhibit at Brown University, an offshoot of the national “To My Unborn Son” movement, a campaign in which students of color asserted the values of their lives, and provided resilient messages of both hop and caution to their future children.

My YP4 experience was a live-changing one, and I am thrilled to continue building with YP4 as a member of the Alumni Advisory Council. YP4 is valuable, because it is creating a strong support network for progressive, young leaders, enabling them to learn, build, and better envision themselves as part of a fluid, connected mass movement towards justice. I have become inspired by the amazing work of other Fellows, encouraged by the stories of those who continued their activism post-college, and emboldened in my life trajectory towards a career in social justice, with practical training and the support of amazing communities, like the incredible community of YP4 staff, fellows, and alumni, to help along the way.

Applying to and joining Young People For was one of the best decisions that I have ever made, and I encourage and empower anyone who is interested in learning about and engaging in progressive, inclusive change-making to make the same decision. Apply!