Picture yourself at your state fair. There are a ton of rides, food, and candy. You’re surrounded by thousands of people that are all experiencing the same rides, food, and candy, yet reacting in very different ways. There is without fail a child crying somewhere, a group of teenagers on their first unsupervised outings, and parents dragging children away for “bedtime.”

Last Wednesday, we felt this tension acutely. We were asked by the Young People For (YP4) team to present as part of “Sex and Politics”, a summer intern series co-sponsored by a group of national reproductive justice organizations like Advocates for Youth and the Center for Gender and Health Equity (CHANGE). We were tasked with developing curriculum for a session entitled “Our Bodies, Our Courts: Reproductive Justice and Judicial Politics.” Balancing the nuance of both reproductive justice and judiciary conversations in our session was certainly chaotic at times — much like a state fair, but in many ways our process of presenting together for the first time allowed us to experience each other and our favorite issues differently.

Here’s a bit of background about each of us:  My name is Elle and I’m currently a sophomore studying international politics and security at the George Washington University here in Washington, DC. I grew up in New York City and moved to New Jersey to finish high school. My high school taught its students everything from sexuality education to international politics, so you could say I had a pretty diverse course load. I’ve taken a series of courses on US politics at government at GW and have interned for a local judge in Philadelphia. For those reasons, I gravitated towards YP4 work on the selection of demographically and professionally diverse jurists. I focused on those considerations within the context of our presentation

My name is Emma and I’m going into my senior year at Kansas State University. I was born and raised in Kansas and had a pretty traditional Midwest upbringing. The conservativeness of my state permeated by entire childhood — especially the formal schooling I received. My high school offered only medically and scientifically dishonest “abstinence-only” sexuality education. After entering college, my eyes were opened to all of the critical gender and sexuality education conservatives in my state had denied me for my own “protection.” I now work across the state to promote comprehensive sexuality education and dismantle laws that limit a person’s access to abortion care. I leveraged my experience doing this work in Kansas to inform the reproductive justice sections of our presentation.

While my experience with the legal aspect of Reproductive Justice in terms of court cases is fairly extensive, my experience with the Reproductive Justice framework has been limited to what I learned about sex ed in health class. Emma’s role in the presentation was to bring in her knowledge on reproductive justice, rights, and Health, three things that I used to think were synonyms for each other. As I watched her put together her part of the presentation, I was amazed at how complex and detailed the framework was. The differences between Reproductive Justice, Rights, and Health were stark yet I had never realized that they could not be lumped together.

During the presentation, I watched as Emma patiently explained what the differences were between the three branches of the reproductive justice framework (rights, health, and justice) and how each branch led was intertwined with the next. Not only was she able to explain the interconnectedness of these approaches, she was able to tie my court cases back into either one of the three branches or all of them. While aspects of reproductive justice are difficult to tie into certain Supreme Court cases, I thought that she did a really great job of incorporating the most important aspects and blending our two topics seamlessly into one.

Elle on the other hand was responsible for explaining the legal side of reproductive justice She started by giving an incredibly detailed overview of the federal courts system and the process by which an individual is nomination for and confirmed to the bench. Even though I’m a political science major, I definitely learned a few new things. Elle described such a complex system with clarity and grace. Colorful graphics and charts were helpful in explaining the courts.

Elle also played a major part in outlining the important Supreme Court cases that shaped this country’s understanding of reproductive rights, health, and justice. We started by describing some of the early cases which laid the groundwork for later reproductive rights wins — like Griswold v. Connecticut It was important for us to make the distinction that the early reproductive justice cases focused on the idea of privacy and how a person’s ability make decisions about their private lives. We then moved on to more recent cases such as Planned Parenthood of Southeastern Pennsylvania v. Casey and Whole Women’s Health v. Hellerstedt. Elle and I emphasized that, whereas early reproductive rights cases dealt with issues of privacy, current jurisprudence is far more concerned with folks’ access to abortion care — specifically legislation which might place an ‘undue burden’ on those seeking access to abortion care.

Elle started out very focused on the courts, and I was very focused on our bodies. Though these were originally our areas of comfort, we both learned so much about one another’s topics that we were able to present in tandem. It was a fun experience to create a presentation about something we are both so passionate about and deliver it to a room of fellow interns! 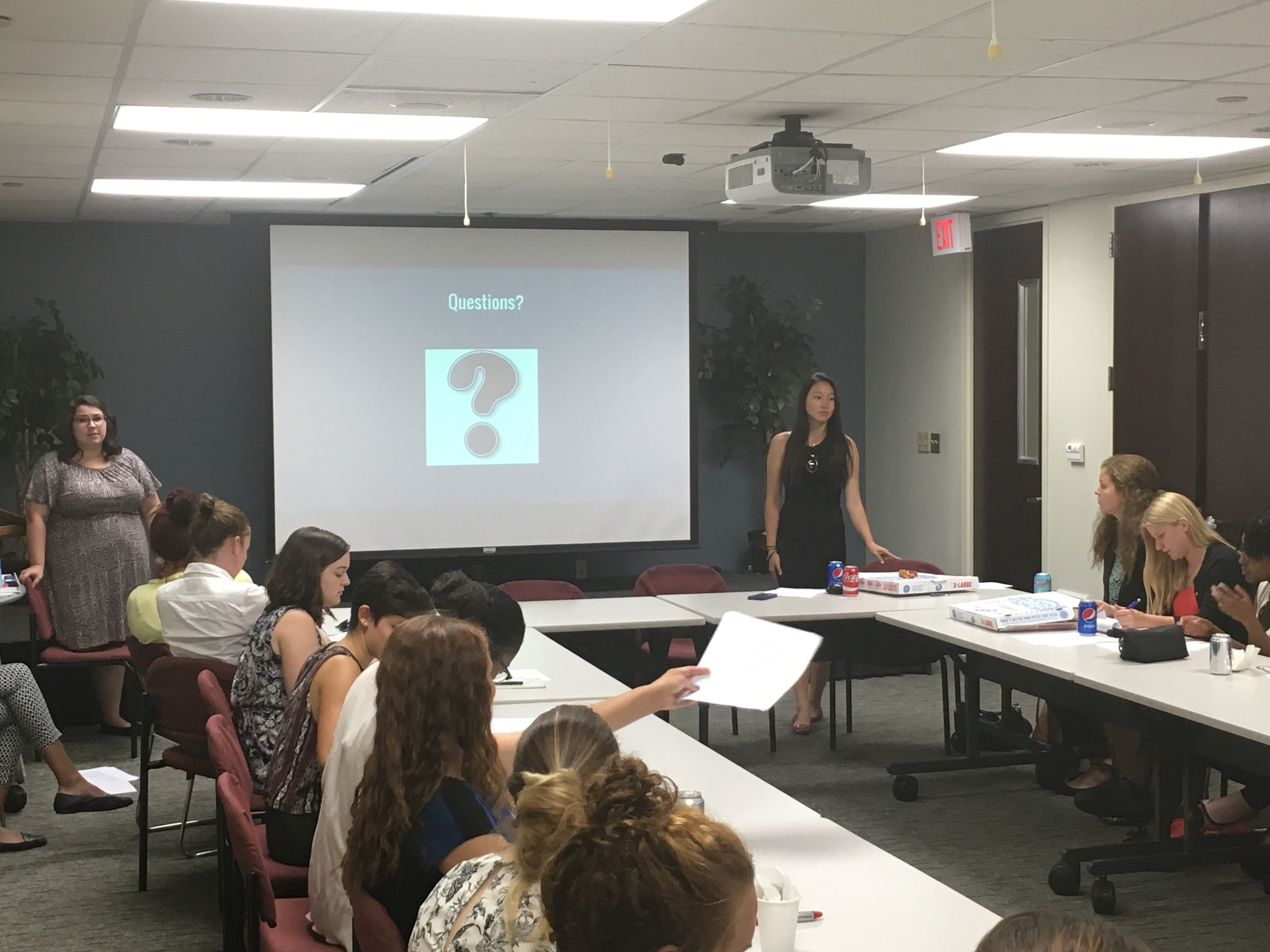