Last Wednesday, I joined thousands of folks as we gathered together to rally against the American Legislative Exchange Council (ALEC) during their annual meeting in San Diego. This was a massive protest to resist this right-wing organization, and they were met with many faces including workers, community organizers, faith-based leaders, and an assortment of other progressives.

ALEC is a national, corporate-funded organization that marries the interests of conservative legislators and corporate lobbyists. ALEC has been instrumental in drafting harmful legislation in many states, ranging from the “Stand Your Ground” law in Florida, to legislation weakening environmental sustainability measures, to bills challenging women’s access reproductive health services. Notorious allies of ALEC include figures like Scott Walker and the Koch brothers.

ALEC pays for legislators to go on extravagant trips, where they collaboratively write legislation to be introduced word-for-word in their home states. ALEC’s event at the Hilton in San Diego was one of these opulent vacations afforded to legislators, and their presence in California was naturally met by resistance from progressive groups, who have clear stakes in resisting flagrant conservatism.

I went to this rally with the United Domestic Workers (UDW) Local 3930, a worker union that represents home-care providers in California. Homecare providers are one of the targets of ALEC, which has written bills targeting worker unions and pushing lower wages and benefits. We arrived at the Embarcadero Marina Park in San Diego close to noon and were met by hundreds of other progressives who greeted everyone with an embrace. It was truly a staggering experience to see such unconditional love and community expressed across the board.

The speak-out portion of the rally was studded with champions from the labor movement, including the legendary Dolores Huerta, who co-founded the United Farm Workers (UFW) movement and now sits on the board of PFAW. Dolores has been one of my heroes since I learned who she was, and I had the opportunity to meet her in living flesh at the rally. She spoke with conviction and presence and talked about our individual ability to bring others into the movement. She implored us to never give up this good fight, and communicated her love for this community and for the movement.

The rally was a short walk from the park to 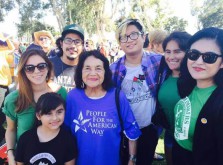 the hotel, where folks continued to give their testimonies about why they are in this fight, and the challenges we face. This continued until 5PM, until hotel security brought in a squadron of police officers in response to rumors of a civil disobedience action occurring soon in the hotel lobby. I left the rally on my bus with the union, and we were unified in our sweat, laughter, and fulfillment from the day.

As a new YP4 fellow, I shared a lot about my love for the labor movement during our regional retreat, and this experience has only further cemented this deep-set appreciation. As someone who comes from a working-class background, there I’m deeply committed to making sure that families do not have to struggle to feed themselves or their children. Seeing for myself how resilient working families are in the face of billionaires and their lobbyists gives me incredible hope for this movement.

Corporate-backed institutions like ALEC are antithetical to the values my parents passed to me when I grew up, like having respect and compassion for everyone, and supporting the people who need it the most. I learned from this action that this collective movement is larger than what I could have ever believed. That this movement consist of leaders who came before me, my elders, and will continue on past what I will be able to do in this line of work. It is indisputable that ALEC got the point that they are not welcome or liked in California, and even now, organizers behind the protest are getting ready for a follow-up action in the coming weeks.