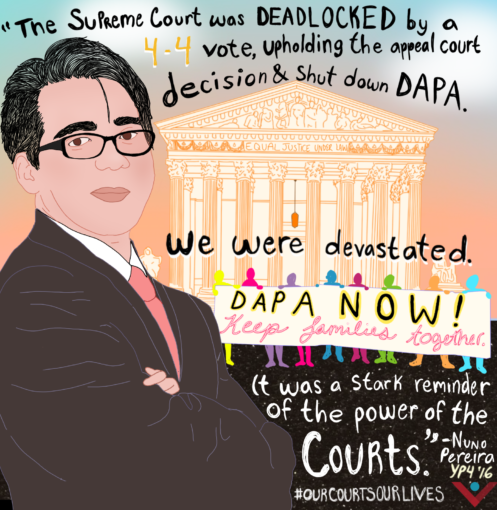 In November of 2014, we heard President Obama announce DAPA, and it gave my family something we were missing for so long: hope. Since I was a child, we lived with a fear that we would be separated and never see each other again; it became an intrusive part of who I was growing up and seemingly split my life in two: as a U.S. citizen and as the son of undocumented immigrants.

However, Obama’s announcement made us imagine what our life could be like, dreaming of building a better future together in the country we call home. Unfortunately, Texas and another twenty-five states soon sued the Obama administration in an attempt to tear it down. We quickly began to see our dreams come crashing down as the U.S. Fifth Circuit Court of Appeals blocked it in November of 2015 — it was a devastating moment; yet, the Supreme Court of the United States decided to review the case in January of 2016. It felt like a second chance, and one that our community did not let slip by.

For months, thousands of activists — documented and undocumented — marched in the streets, demanding that the Supreme Court listen to the plight of the people. I had my chance to enter the chamber in April of 2016 during oral arguments, and it was like walking between two different worlds: outside the chamber were thousands of people, passionately rallying together for the opportunity to live their lives; yet, inside the chamber were eight Supreme Court Justices, intently debating the merits of the appeals court decision — it was like night and day.

We remained hopeful that justice would be served, and that we could finally live a peaceful life; however, just two months after oral arguments were heard, news broke of their decision: a tie. The Supreme Court was deadlocked by a 4-4 vote, upholding the appeals court decision and shutting down DAPA. We were devastated, once again, and found ourselves back in the same scenario: surviving the best we could. It was a stark reminder of the power of courts, and how lives can either be brought together or torn apart as a result