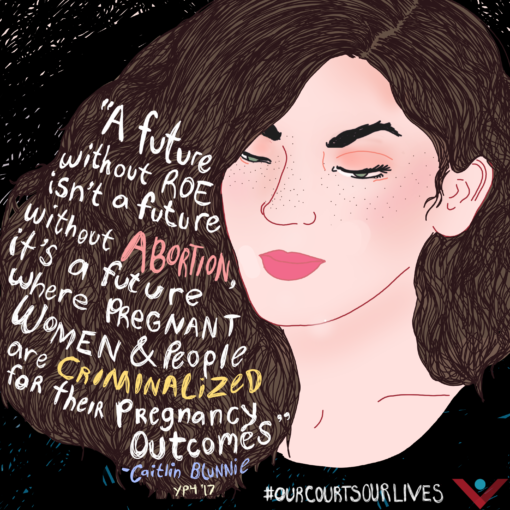 At the end of last summer, I had an abortion. Pregnancy caught me off-guard, but when I heard the doctor say “You’re 9 weeks pregnant,” I didn’t have any doubt in my mind what I wanted to do. That night, I remember meeting my best friend, and we hashed out a plan. Working with the abortion restrictions in Virginia, we drove to Maryland and just three days later, I had an abortion.

I’m not somebody who fits into the mainstream narrative of someone who “deserves an abortion.” My abortion wasn’t tragic, and I had no problem deciding that abortion was the best choice for me. By all means, I’m who my opposition would argue should be forced into parenthood: I had health insurance, a steady income, and was on my feet in my own apartment. Even worse? I wasn’t on birth control. According those people, I am exactly the problem with abortion being legal.

I’m not here to prove that I “deserved” the right to have an abortion – because that isn’t relevant. Instead, I’ll tell you how overturning Roe won’t stop people from having abortions. It’d be foolish to forget that it was just fifty years ago that hospitals had septic abortion wards filled with women who had nearly killed themselves trying to handle their abortions on their own. Roe took this into consideration, and the decision intended to put an end to people dying from unsafe abortions. A future without Roe isn’t a future without abortion, it’s a future where pregnant women and people are criminalized for their pregnancy outcomes.

The effort to get rid of Roe, whether it’s by overturning the decision or chipping away at it, has nothing to do with protecting women or life. At the root of the issue is a group of people who believe they know what the best outcome for your pregnancy is. This isn’t about what’s right and wrong, this is about taking away a woman’s right to control her own body, and for those in people to relinquish control.

This isn’t a debate about “pro-choice” or “pro-life”, because our world doesn’t exist in hypotheticals. Abortion is always going to exist, and now it’s on the “moral right” to decide whether or not that decision should lead to women being punished by imprisonment or death.