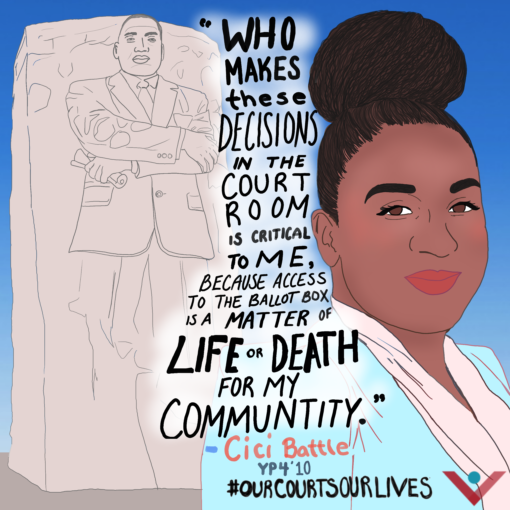 As a young black woman in the United States decisions made in our Federal Courts have been instrumental to my life. Whether it’s from historic cases like Brown v. Board of Education or Roe v. Wade, the Supreme Court in particular has played a critical role in my life and our progression as a nation, but this is far from the whole story. Our courts have not always been a forum for progress; decisions made in US federal courts continue to neglect the rights of millions and thus put our lives in danger, particularly young women of color.

Nowhere is this fact more apparent than the fight for voting rights. Though women were granted the vote after the passage of 19th amendment, it wasn’t until far into the Civil Rights Movement that the courts began to limit discriminatory Jim Crow Era practices such as “white primaries” and poll taxes that kept black women from the polls. This shift occurred only after numerous court decisions that actually upheld racist Jim Crow era laws that expressly barred or limited black participation in the electoral process.

Fast forward 50 years, our fight for voting rights is STILL not over. In 2013, the Supreme Court rendered a key section of the Voting Rights Act that required states with a proven history of discrimination to get federal approval before changing their voting laws inoperable. This decision opened the floodgates to laws restricting voting rights across the country. States previously covered by the law have engaged in significant efforts to disenfranchise voters since 2013.

This means that my home state Florida, one that already disenfranchises 1.6 million of its citizens with a lifetime ban on voting for people with felony convictions (including 21% of its black voting age population) can institute new laws that make it harder to vote.

The same rings true for the Court’s most recent decisions on voting rights. In 2017, the Court upheld a scandalous Ohio voter purge policy in the Husted v. A. Philip Randolph Institute case, validating a dangerous tool for voter suppression. In 2018, the Court reversed a lower court’s findings of violations of the Voting Rights Act and failed to strike down discriminatory racial gerrymandering in Texas in Abbott v. Perez, paving the way for the continued suppression of voting power for people of color.

And get this, all of these decisions have been made with a 5-4 decision split along ideological lines. One judge could have meant the difference between decisions that protect the rights that my ancestors fought for and decisions that hold my community back.

Who is making these decisions in the court room matters to me, because access to the ballot is a life or death matter for my community. By voting on elected offices that have the power to impact our livelihood, my access to the ballot determines life outcomes. So let’s be clear: judges that uphold voter suppression aren’t just threatening my voting rights, they are threatening my life.

As the nation selects its next Supreme Court justice, we are defining lives for decades. The decisions this judge will make have the capacity to safeguard the progress we have made as a nation, or turn back the clock on voting rights for young women of color like me. It is up to us to hold the Senators that will confirm our next Supreme Court justice accountable. We must fill the courts with judges that will stand up for our lives, not threaten them.