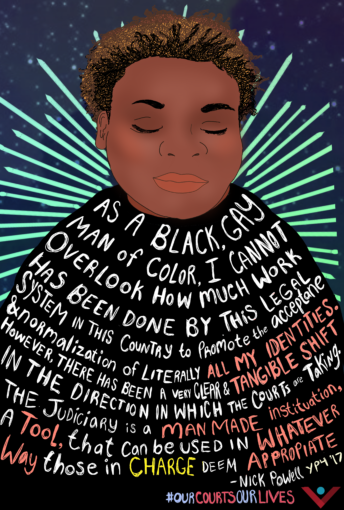 Over the last three years, my awareness as to how impactful the courts in the United States is to the everyday lives of has increased dramatically. In addition to this influx of knowledge and understanding on how our judiciary works, I have also realized that this puts the uniformed populace in a very precarious position. This fundamental absence of information on how the courts in our country work is at a critical mass, and factoring in that the courts shape each citizens’ daily existence, there is a lot of work that must be done to fill in the gaps of all of the missing information. Since the dawn of our nation, the law has been the primary method of creating, affecting, and ushering in change in this country. As a U.S. citizen, I am afforded the rights and privileges that are outlined by our Constitution and its Amendments, as well as the other legal documents that provide me with a comfortable amount of autonomy over my own life and choices. However, the judiciary is not an omnipotent body that is capable of running itself, factoring in what is good for the well-being of society as a whole; it is a man-made institution, a tool, that can be used in whatever way those in charge deem appropriate.

While there are limits, restrictions, and status quos with how our judiciary is to behave, under the current Presidential administration, our court system, from the local level all the way to the Supreme Court, has the potential to strip our society of various legal provisions and protections that have already been working to make our country great. Not only this, there is room for our judiciary to create new laws and set precedents that will do more overall harm than good, from the moment of their inception. As a Black, gay man of color, I cannot overlook how much work has been done by this legal system in this country to promote the acceptance and normalization of literally all of my identities. There is no part of me that has not been touched by the mighty powers of our courts, from the places I can go while in public, doors I am allowed to enter businesses with, and even my freedom to marry whomever I so choose. However, there has been a very clear and tangible shift in the direction in which the courts are taking. There have already been rulings that have rolled back labor rights, muddled immigration reform, and the extremely conservative court appointments by the President are all major points of concern at the present moment.

With this, the national call to action that YP4 is initiating with our Courts Matter Campaign is one major way for everyday people to get involved and leverage their stake in this fight with our court system. It is with the engagement of community partners, creation of conversations on the topics of our judiciary, on top of educating folks with ways they can put their hands in this movement, allowing them to reclaim a great deal of agency in this battle, that we can begin to turn the tide. Through this campaign, we the people, have a unified and reinforced voice that we can use when addressing our government, reminding them that we have the right to frame our own lives, and that we too, can use the courts to shape our own world.