Earlier this year, Supreme Court Justice Ginsburg told an interviewer that “[w]e will never see a day when women of means will not be able to get a safe abortion.” Last week, the Supreme Court announced that it will hear Whole Woman’s Health v. Cole, a case that will essentially decide whether thousands of average and low-income folks will have access to safe abortions. Whole Woman’s Health is a challenge to HB 2, the Texas abortion clinic restrictions Wendy Davis famously filibustered in 2013.

Whole Woman’s Health is a gynecological clinic with offices in Fort Worth and San Antonio. It is challenging two provisions of HB 2: a requirement that doctors who perform abortions have admitting privileges at a hospital within thirty miles of the clinic, and requirements that all clinics performing abortions be outfitted as “ambulatory surgical centers.” The Texas legislature argues that these requirements are to protect women. Opponents argue that these restrictions are thinly-veiled attempts to shut down clinics and severely limit access to abortion.

The Supreme Court will decide first whether it is the place of the courts to assess whether or not the law fulfills its purpose of “protecting women.” The “big picture” question follows: do these restrictions constitute an “undue burden”? In Planned Parenthood v. Casey in 1992, the Supreme Court held that states may restrict abortion so long as those restrictions do not place a “substantial obstacle” in the path of those seeking a pre-viability abortion.

Perhaps these restrictions seem well-meaning on their face. After all, doesn’t “increased safety” sound like a good thing? A slightly deeper look reveals that these restrictions are not about safety, but about restricting abortion access for political reasons. Abortion is a very safe medical procedure. The risk of major complications in a first-trimester pregnancy is incredibly low; the risk of a major complication requiring hospitalization is .05%. Additionally, people have safely been getting abortions  for decades now– with this low complication rate– at clinics not outfitted as ambulatory surgical centers. (For comparison, the major complication rate for colonoscopies is higher than for abortion)

So what is the real impact of this law? Abortion providers often cannot get admitting privileges at hospitals because of political pressure from anti-abortion activists. (Happening in Columbia, MO right now). Further, retrofitting a clinic as an ambulatory surgical center is expensive and sometimes not possible given the building’s infrastructure. If clinics cannot overcome these obstacles, they will close. People seeking abortions will have to take off work or find child care to travel up to 250 miles one way, wait for 24 hours, and then travel another 250 miles back home. 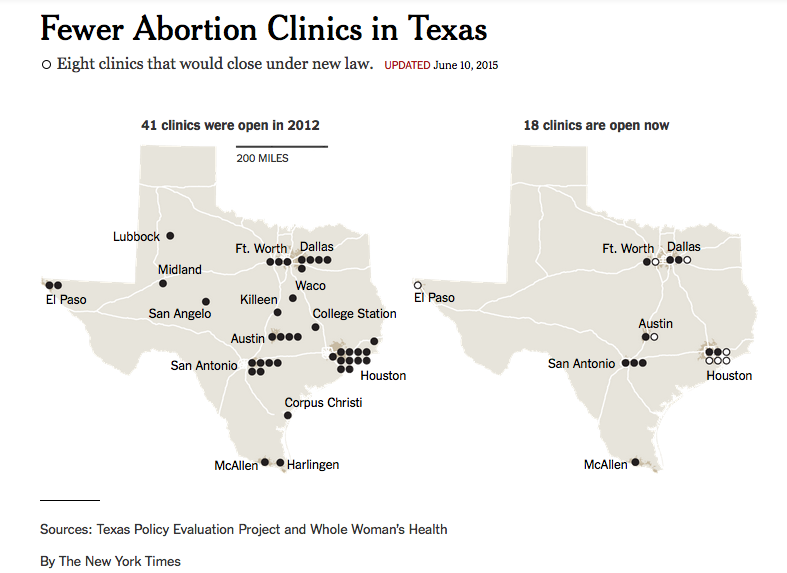 This is simply not possible for many people who work hourly jobs, who don’t have reliable transportation, or can’t afford childcare. In effect, we will return to the world Justice Ginsburg was referring to: wealthy folks can travel long distances (or internationally) to get the health care they need, while poor people will be forced into either continuing unwanted pregnancies or taking matters into their own hands. In fact, since the law in question went into effect, an estimated 100,000 to 240,000 Texas women have tried to self-induce an abortion without medical guidance. Ultimately, under the guise of “safety,” the state of Texas is likely pushing people into riskier health decisions, all in the name of political anti-abortion sentiment.