Over the course of the year, YP4 hosts numerous events to ensure the bonds forged between Fellows and alumni remain strong. Please see below for a list of upcoming events. 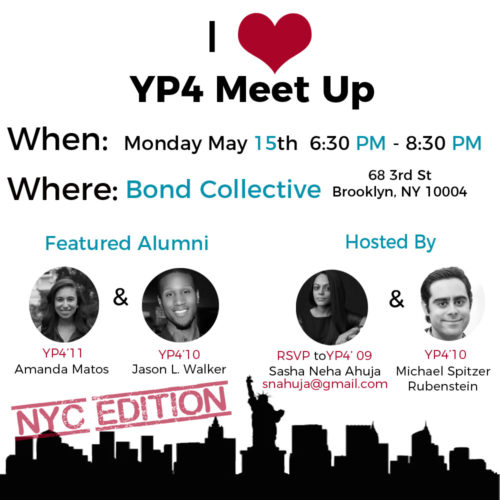 In this political moment, many of us are on the front lines of the resistance. Come hang out with fellow YP4 alumni & hear from three alumni who are doing incredible work.

Jason Walker is a grassroots community organizer at VOCAL New York where he also serves as the Coordinator of the New York City AIDS Housing Advocacy Network. Joining VOCAL’s team in 2013, Jason has helped bring together hundreds of low-income people in NYC living with HIV/AIDS to improve local laws and policies around access to affordable housing. Jason was a 2009 YP4 Fellow and the 2016 recipient of the People for the American Way Foundation’s Norman Lear Award.

Kendal Nystedt is an immigration Staff Attorney at Make the Road New York where she is able to pursue her passion for immigrants’ rights work in a space where members, organizers, educators, and lawyers collaborate to win. Kendal was a YP4 Fellow in 2008, a member of the YP4 Steering Committee in 2009, an FLLA Fellow in 2009, and Co-Chair of the YP4 Alumni Board in 2010-11.

Amanda Matos serves as the Government Relations Specialist at Girls for Gender Equity, leading the participatory governance process for young women of color to innovate policy solutions and implementation plans for their communities in partnership with New York City Council’s Young Women’s Initiative. As a 2011 YP4 Fellow, Amanda co-founded the WomanHOOD Project, which is a youth-led after-school mentorship program for girls of color in the Bronx.

This event is hosted by Sasha Ahuja & Michael Spitzer-Rubenstein.