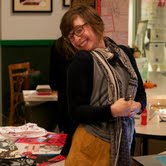 Emily was raised in Newport News and studied International Studies at George Mason University. On campus, Emily served on the executive board for her school’s Invisible Children club and worked in the Office of Orientation. Emily’s engagement in social justice is largely internationally focused, although she has a keen interest in American politics as well. She found where these two areas intersect during a course about Human Trafficking in which she learned about the slave labor used by many of America’s top companies and she has dedicated herself to advocating for fair labor practices since. She also completed an internship with Young People For, where she helped rebuild the program’s career center and select the Front Line Leaders Academy class. Emily is a fierce human rights advocate and in her free time, she enjoys playing music, sewing, and cooking comfort food.