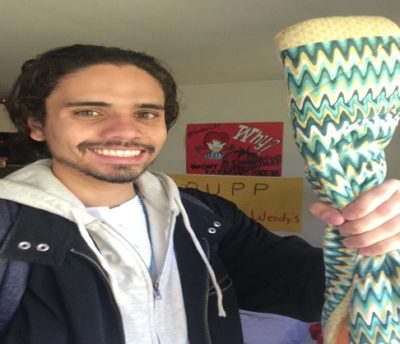 Michael Jorell Reyes strives to have his work speak for himself and his views of humanity’s needs. Wanting people to achieve the greatest self they can be, Michael is drawn to resource accessibility and the avenues for spreading awareness and change to the inequities people experience. Focusing on internationalization amongst three seemingly different groups of study, Michael found himself working in the realms of Engineering, Social Justice, and the Arts.  Innovative alternatives that can curb global energy dependency on petrol oil fuels such as solar photo-voltaic cells and wind turbine were Michael’s research of focus. His pursuit of an Environmental Engineering degree is to remain at the forefront of developing technologies. Mr. Reyes has partaken in Wind Mitigation research at UF and has attended Florida Energy Systems Consortium located at UF. However, history shows development is only possible if considered a part of an engineering plan from inception. Here social justice and engineering planning blend in the form of legislative actions that considers all people and not just the wealthy elite. Michael has served as the Public Relations officer of CHISPAS UF, a club dedicated to accessibility for undocumented students; some achievements include a graduate practicum, a paid internship and a scholarship all eligible for undocumented students. Raising awareness isn’t only signing papers but can creatively require the arts to further agendas of equality. Michael was a member of the “Florida Players Troupe” and performed an ensemble role in UF’s first attempt of “In the Heights” a Broadway musical focusing on the has lived of Hispanic immigrants raised in York City facing gentrification. This historical linkage is part of his own narrative as a Latino from New York as well. Michael actively seeks to develop these three dynamic sectors of Engineering, Social Justice, and Arts by honing the skills entangled with each.